“Which sample is this? Is it sheep?”

“No. It’s Satish’s goat leather. It has some white patches that we’re looking into.”

“Ah, did you check for calcium?”

“Sometimes this happens during retanning you know. Even a slight temperature change while soaking can be the problem. Maybe you should check that too.”

There is a quiet but constant buzz of activity around the biophysics laboratory at the Central Leather Research Institute (CLRI) in Chennai – technicians tinker with the atomic force microscope, a researcher mills around to get his sample tested, a PhD student adjusts the controls of a spectrophotometer, while another makes furious scribbles in her notebook. Every so often, Aruna Dhathathreyan quips in with an encouraging or helpful suggestion that her lab members eagerly take in.

Aruna’s lab studies protein folding and misfolding under different conditions. “When proteins are inside cells, they cannot behave the same way as they do as free molecules. This is because they are in a small space with many other biomolecules,” she explains. This causes crowding or aggregation, which can affect our health in the form of  diseases like osteoarthritis, or industries in the form of bad leather.

“Leather is made from animal skin and involves the stabilisation of skin proteins using salts, a process called tanning. Tanning involves aggregation and that is where this lab comes in,” says Aruna. The team builds models that will help mimic protein behaviour. Based on this, they can predict how to induce favourable changes in the protein’s properties and give us better leather. “Since most of us here are physicists, we also design our own instruments that are better suited to study our samples than commercially available instruments.”

Working at a CSIR lab

CLRI is one of the many institutes scattered around the country that is affiliated with India’s Council of Scientific and Industrial Research (CSIR). Judging from the atmosphere here, it certainly looks like CSIR labs can be a really interesting place to work in. What makes them different is that unlike other institutes like the Indian Institute of Science (IISc), or the Indian Institutes of Technology (IITs), CSIR labs need to prioritise solving problems faced by industries – in CLRI’s case, the leather industry.

“This means that our research can’t be only open-ended and individual-driven, but also has to address local issues” explained Aruna. She cited an episode where the lab was tasked with finding out why a shipment of sheep leather ordered by Marks and Spencers reached them damaged. Much to the supplier’s relief, investigations revealed that the damage happened not during processing but during transport.

The respect the other lab members have for Aruna is as palpable as experienced head biophysicist’s fondness for them. Her comfort in this role stems from the fact that she’s spent enough time in most of their shoes at some point in her life. 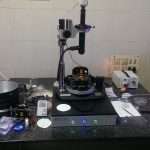 The powerful atomic force microscope. A fine tip scans the surface of the sample to create a 3D representation. 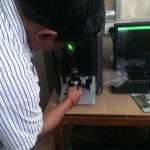 A lab member inserts the sample into the slot for analysis 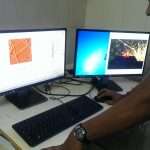 The resultant image is observed. This is a goat leather sample. 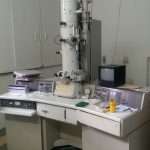 A vintage electron microscope that the team is hesitant to dispose of because it still works despite being out of date. 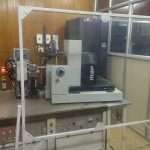 The pursuit of physics

“After my schooling in Delhi, I wanted to study physics. However, both the options available to me in the city were over 30km from home and Delhi, even then, had a dubious reputation with regard to safety. So my parents told me to forget it, and pursue a humanities course at a nearby college.” But Aruna’s heart was set. She decided instead to move to Chennai, where she went on to study physics in Women’s Christian College and Madras Christian College.

“Physics in those days usually involved choosing between electronic and nuclear.” Though she had chosen the former, Aruna itched to work on something which would be used for a larger purpose. Biophysics was just taking off then, so Aruna was motivated to apply for a fellowship that allowed her to work in the department were protein structure extraordinaire Dr. GN Ramachandran (students of biochemistry will recognise him from the Ramachandran plot) worked. “I was lucky to study there because the lab had a good tradition, having been the workplace of such renowned scientists.”

But the most exciting period of Aruna’s life in science came after she completed her PhD. “Somehow, I did not want to apply for a post-doctoral fellowship in the US, so I applied around Europe instead.” She ended up being accepted by the Max Planck Institute in Germany, marking the beginning of a highly memorable six years. “Though theirs was a chemistry lab, they were looking for a physicist. I thought this is good as the institute was funded well and was composed of some of the best physical chemistry teachers of the decade.” Aruna’s own boss was the last PhD student of legendary molecular biochemist Linus Pauling.

The value of a lab with a “good tradition” again re-emphasised itself in her life, as she found herself mixing with an intellectually and culturally diverse group. Her project on hybrid oligonucleotides was just one component of a larger one involving bigger metaphysical questions on the origin of life and evolution. Naturally, the atmosphere was very different from what she had seen in India. “There was a lot of interaction with enthusiastic junior scientists and this was very motivating for us. I learnt that one cannot be a specialist in everything so it’s important to address ignorance and the right time,” she said.

Recently retired as Head of Department, Aruna is finding the retired life quite liberating. “Less administrative work!” she says gleaming. But more importantly, she says there is no more a pressure to publish papers. “So now if a PhD student asks me for help, I can tell them I do not want co-authorship. It gives me great happiness to be able to sit with them and learn together. I can be involved in various projects now.”

Aruna is unhesitating when it comes to acknowledging the role of family support in her accomplishing all that she has. “Once, I decided to stay home with my son during his board exams. But on the second day he advised me to go back to the lab!” she laughed. “It’s definitely an advantage if your children are independent and not clingy.”

It’s a busy life, but Aruna maintains her chirpy demeanour and insists that she has several hobbies beyond science. “I love fiction,” she declares. She is also a music aficionado (“classical, pop and some rock, though not heavy metal”) and a former painter. “You will often find me discussing movies and actors with my students, in fact, sometimes I know more than they do!” she says, amused. “I think it’s important for scientists to be aware of trends in the world. They can’t lead isolated lives.”

It doesn’t take long to figure out that Aruna finds human interactions an important part of a life in research. Take her views of teaching for example. “Research, uncoupled with teaching, ends up individual and selfish. Of course, you get papers published, people read them, cite them, but if you are a teacher, you will do all this and also pass on this knowledge to students.”

Today, it may not be required for a student of science hungry for a similar experience to leave India, according to Aruna. “A student with a MSc degree from a good Indian biophysics laboratory is as capable if not more to pursue his or her PhD anywhere in the world.”

“Institutes like Indian Institute of Science (Bengaluru), National Center for Biological Sciences (Bengaluru), Jawaharlal Nehru University (Delhi) and some of the Indian Institutes of Science Education and Research are doing lot of similar multidisciplinary research. I find the sort of collaboration where different scientists come together to share resources beautiful,” she commented.

Why we need good teachers

Having good teachers is a huge asset, but there are exceptions. “I had a student about five years ago who hailed from a small village near Pondicherry. His background was very humble but he managed to finish high school and passed the CSIR exam to join us to study theoretical chemistry. He was so bright that he chose his research problem all on his own and designed a methodology to study it. Today, one of his applications is used in the auto electronics industry.”

However, cases such as these, where a brilliant student presented with opportunities finds success irrespective of background and external factors, is rare. “Of course in India there is the question of how many children actually get this opportunity.”  For most other students, said Aruna, good teachers are crucial or they will end up stuck in a field that is not their strength, become disillusioned and possibly make for bad teachers themselves.

1 response to "Aruna, the Leather Detective"